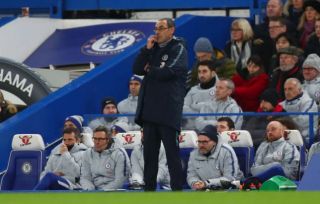 Chelsea fans voiced their displeasure at Maurizio Sarri against Manchester United tonight in what was another poor display.

The Blues look to be going nowhere under the Italian tactician, despite him impressing so much at previous club Napoli before replacing Antonio Conte at Stamford Bridge last summer.

Sarri will now surely face further questions over his future, and it seems many fans are fed up with waiting for his ‘Sarri-ball’ philosophy to bear fruit.