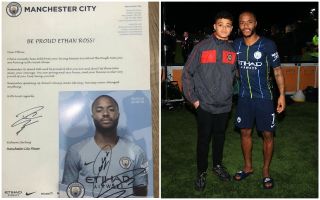 Man City ace Raheem Sterling has shown his class once again by meeting the young fan that he wrote a letter to offering support after he was racially abused.

Ethan Ross was at City’s clash with Newport County at the weekend as he plays for the side’s Under-14 team, and it comes after he received a response from Sterling having been subjected to racial abuse at school.

As seen in the tweet below, Sterling shared some wise words with him to lift his spirits, and the England international was able to say them to his face as the pair met on Saturday night after the full-time whistle.

It’s claimed that Sterling gave him a signed shirt and some more advice on how to deal with the bullies, and there is no doubt that the youngster would have appreciated the City ace taking the time out to speak with him again.

This is really classy from Sterling and a great gesture to a young fan, with Ross undoubtedly having a memorable night on Saturday.

Read what @sterling7 sent to a fan that was suffering from racial abuse. This man does not get enough credit. ?? pic.twitter.com/N025OhFUMq

It was probably as heartwarming for me as it was for you to finally meet up, Ethan. Again, always be proud of who you are, and never stay silent. #SpeakUp #youthsarethefuture pic.twitter.com/V8VXxtL8Ge