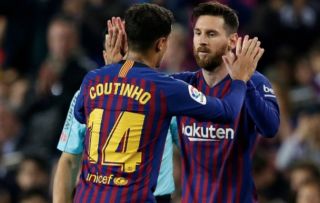 Cafu has been discussing compatriot Philippe Coutinho, and believes he’s struggled to shine at Barcelona due to the fact that he’s playing beside Lionel Messi.

As noted by BBC Sport, it was reported that the Catalan giants spent up to £142m to sign Coutinho from Liverpool last year.

With that price-tag in mind coupled with the form that he was producing at Anfield, expectations were undoubtedly high over what the Brazilian international could bring to the Nou Camp.

Unfortunately for all concerned, he has struggled to hit those lofty expectations, as he’s managed eight goals and five assists in 34 appearances in all competitions so far this season.

While that’s a decent enough return for most players, given his role in the team and the quality that he possesses, it’s fair to say that much more is needed from him moving forward.

However, Cafu believes that playing alongside Messi is a factor that can’t be ignored, as he insists it has affected Coutinho.

“Coutinho did something great at Liverpool, he became their best player, but he is now at Barcelona and he has changed everything completely,” he is quoted as saying by Mundo Deportivo. “We have great hope with Coutinho, both in the Brazilian team and with Barça. Playing beside Messi, it’s difficult to stand out.

“With a little time, he’ll do more with Messi and Suarez.”

Messi is undoubtedly Barcelona’s talisman and their main threat in the final third. Adjusting to play alongside him and helping him flourish is part and parcel of Coutinho’s job, as it is with Luis Suarez.

In turn, perhaps it is about learning to strike the right balance for the 26-year-old that will determine whether or not he fully repays the faith shown in him by Barcelona and is considered a success by the time his stint at the Nou Camp ends.