Manchester United and Arsenal are interested in signing Birmingham City striker Che Adams, after his impressive displays in the 2018-19 campaign.

The 22-year-old starlet has scored 19 goals in 32 Championship fixtures this term, helping the Blues climb into the top half of the table and to within sight of a playoff spot.

Adams has spent the last two-and-a-half years of his career with Birmingham but this season he has really taken his game to another level, adding a clinical edge to his contribution in the final third of the pitch.

According to The Mirror, United and Arsenal sent scouts to watch the prolific English youngster in action last week and now both clubs are set to launch transfer bids this summer.

Burnley attempted to sign Adams in the January transfer window, but they saw a £9 million bid offer rejected by Birmingham, who are hoping to receive at least double that amount for their most prized asset – as per The Mirror.

Adams had managed to score in six consecutive league matches before Birmingham hosted Bolton last Tuesday, which put him one game away from equalling the club record set by the legendary Trevor Francis.

Garry Monk’s side were ultimately beaten 1-0 on the night after Adams came agonisingly close to scoring a landmark goal in the dying seconds, but he had plenty of admirers watching on in the crowd. 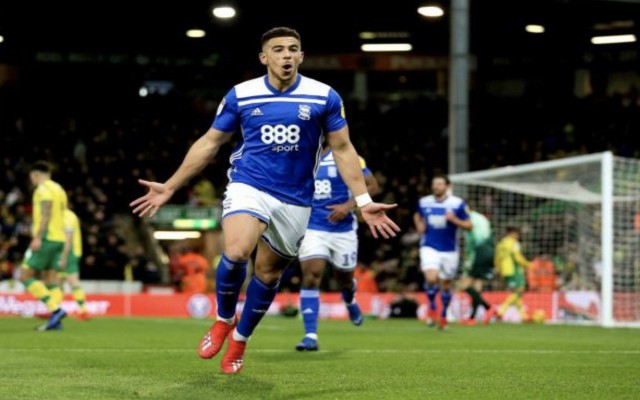 United only have Marcus Rashford and Romelu Lukaku to call upon as traditional centre-forwards at the moment, that latter of whom has struggled to prove himself at Old Trafford.

Adams could add a new dimension to the Red Devils attack, particularly if caretaker boss Ole Gunnar Solskjaer earns the permanent managerial role, given his inclination to promote the younger members of his squad as much as possible.

Arsenal, meanwhile, have arguably the Premier League’s most lethal striking duo Pierre Emerick Aubameyang and Alexandre Lacazette leading the line, but they are short on back up options.

The Gunners could provide serious competition for United in this particular transfer saga, but it remains to be seen whether or not any formal offers will be submitted when the market reopens in May.