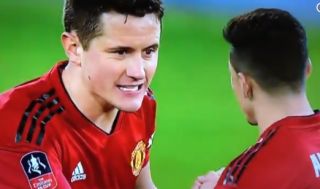 Manchester United midfielder Ander Herrera is getting a lot of praise on Twitter right now for this classy gesture towards Alexis Sanchez at the end of the win over Chelsea.

The Red Devils won 2-0 at Stamford Bridge to progress to the FA Cup quarter-finals, but Sanchez’s performance isn’t exactly what will be remembered from the game.

Still, Herrera was clearly happy with his contribution in his brief appearance off the bench as he went over to him at full time.

Fans are now praising the Spaniard’s leadership as he perhaps tries to restore Sanchez’s confidence after his major struggles in his time at Old Trafford.

Love how Ander Herrera went over to Alexis at full time. He mentioned post match how impressed he was with how hard Alexis Sanchez worked when he came on. Alexis is having a hard time and Ander Herrera being a leader and motivating him is brilliant. Has to be our next captain! pic.twitter.com/jzjeclp6DR

Herrera is taking it upon himself to try reinvigorate Sanchez and get his confidence back !! This and praising him in his comments post match!!Great leadership!! https://t.co/Bd37cHlWcE

This video shows Herrera motivating Sanchez. A player whose had a rough time at the club. Good leadership and sportsmanship from the Spaniard. ?pic.twitter.com/aNeuBb79eQ

Sanchez has Herrera looking out for him. Great stuff.

Been so impressed with Ander Herrera since Solskjaer came in, and this just sums him up. Lovely touch praising Sanchez for his performance when he came on ? #MUFC https://t.co/BkY3w6f9yH

Herrera was sublime tonight, the way he talked bigging up Sanchez after the game when he’s struggling is why he’s captain material #herrera

Love how Herrera made a point of praising Sanchez & McTominay ! Sanchez attitude when he came on was excellent !