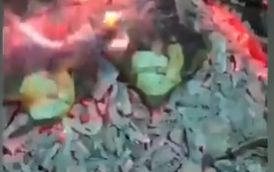 Mauro Icardi is a name making a lot of headlines at the moment after being stripped of the Inter Milan captaincy.

AS detail the whole saga with the Argentina international, including attacks on his family after recent controversies.

His wife and agent Wanda Nara, however, has now made the surprise step of uploading this video on an Instagram story, as picked up in the tweet below by Calciomercato.

Despite publicly backing Icardi, she may now have turned on him after burning what looks like a photo of her and the striker together.

This suggests things have now soured between Nara and Icardi, though we don’t know much more about this at the moment.