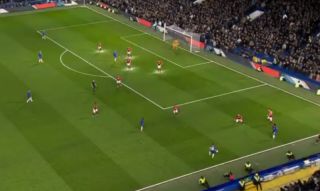 Chelsea were dire against Manchester United in their FA Cup clash tonight, with the Red Devils running out deserved 2-0 winners.

The Blues are not looking good under Maurizio Sarri, whose position as manager is now sure to become the subject of even more speculation.

As the pundits analysed Chelsea’s display on Match of the Day afterwards, the picture above sums up how bad they were as they vaguely attempted a comeback.

With around 20 minutes to go at 2-0 down, Chelsea went forward against United but had just one man in the penalty area.

While Sarri’s tactics clearly worked wonders at Napoli, this surely illustrates that something needs to change if he is to have any hope of holding on at Chelsea.