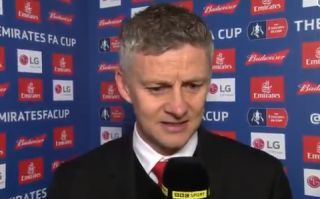 The Norwegian tactician discussed how nice it might be to pick up a trophy after United’s progress in this competition – one he won during his playing days with the Red Devils.

In fact, Solskjaer remembered his United side beat Shearer’s Newcastle in the 1999 final – and relished the opportunity to remind the former Magpies star.

Watch the amusing moment below:

I think Ole just got the job pic.twitter.com/Krz6SX871I