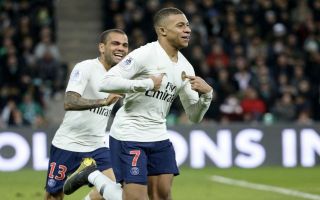 The Frenchman has now scored seven goals in his last nine matches across all competitions, shouldering the goalscoring burden for PSG in the absence of Neymar and Edinson Cavani.

He produced a superb performance against Manchester United in a 2-0 Champions League first-leg win at Old Trafford last Tuesday, during which he managed to score the decisive second goal and he took that confidence into PSG’s latest Ligue 1 clash.

Mbappe scored the only goal in a 1-0 win against Saint Ettiene which ensured that the French champions moved 12 points clear at the top of the table and it was a strike worthy of winning any game.

The 20-year-old managed to find the top left-hand corner of the net with a sensational first-time volley after latching onto a ball over the top in the box, which was his 19th Ligue 1 goal of the 2018-18 campaign.

His latest effort is sure to strike more fear into Man United fans across England ahead of their trip to Paris for the second leg tie on March 3, which sees them facing an uphill battle to reach the quarterfinals of Europe’s most prestigious competition.

Still can’t get enough of Mbappe’s goal from tonight pic.twitter.com/dpPBsqrurb

Are we even surprised anymore to what this kid can do? ??pic.twitter.com/CADjofZmp2

Kylian Mbappe‘s goal tonight against St Etienne, what a finish from the wonder kid.
Believe it or not this guy is the next big thing in football.
Aspiring ? pic.twitter.com/R8apwooqhr