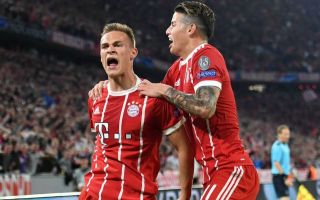 Bayern Munich produced a disciplined and industrious performance on Tuesday night to hold Liverpool to a goalless draw at Anfield.

The two sides will meet for the second leg of their last-16 Champions League tie on March 13, with Bayern now hoping that they can make the most of home advantage and advance to the quarter-finals.

SEE MORE: ‘So one dimensional’ – These Liverpool fans react to performance against Bayern Munich

However, they’ll have to do so without right-back Joshua Kimmich, as after picking up a yellow card in the first half against the Reds, he will now miss the return leg through suspension.

That is arguably a major boost for Liverpool as the Germany international produced a key display in the Bayern defence in terms of trying to shackle Sadio Mane on that flank.

Having shown patience and poise on several occasions to nullify his threat, it could be an area that Liverpool now choose to target and possibly exploit with Rafinha likely to get the nod in the second leg to fill the void.

Further, Kimmich, 24, has also contributed an impressive 13 assists in 32 appearances so far this season, and so Bayern will surely miss his threat going forward down the right flank too as they will now need to score next month to ensure that they advance.

In turn, with that in mind, there is no doubt that it’s a huge blow for the Bavarian giants to be without Kimmich, and so it remains to be seen whether or not that proves to be decisive when these two sides cross paths again in Munich.

Kimmich booked and out of the second leg #LFC