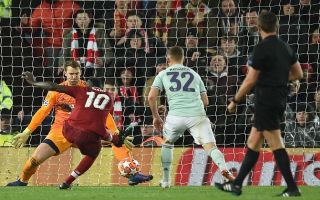 The Liverpool fanbase had a lot to reflect on after the first half of their clash against Bayern Munich was jam-packed with golden opportunities that both sides wasted.

The game got off to a flying start with both sides threatening one another, the first goalscoring opportunity came for Bayern when Robert Lewandowski’s close-range effort was blocked by Alisson. Take a look at the Brazilian’s clutch save here.

Liverpool had a chance of their own in the 32nd minute, winger Sadio Mane had the entire goal to aim for but somehow managed to fire his shot far wide. Take a look at Mane’s horror miss here.

Hosts pile on the pressure just before the break but are unable to take chances. pic.twitter.com/rsLkh4SOFB

One thing to come out of the first half that will give Liverpool fans some confidence heading into the second-half and more importantly the second leg is that Bayern right-back Joshua Kimmich picked up a yellow card in the opening 45 minutes – meaning that he will be suspended when the two sides meet again.

There were plaudits for midfielders Jordan Henderson and Naby Keita from fans at halftime and rightfully so the Liverpool faithful slammed Mane for his missed chance.

Henderson won the most of the praise from fans, the England international is often unfairly written off by fans but the 28-year-old hasn’t put a foot wrong so far today.

Keita Hendo Gini running the midfield like a boss

Hendo shutting up some haters

We need to take our chances otherwise we good?

Learn how to shoot

Decent half. Mane just needs to be more clinical

Playing well but need to get a result.

Hendo haters are nowhere to be found! What a freaking game from him!!!!