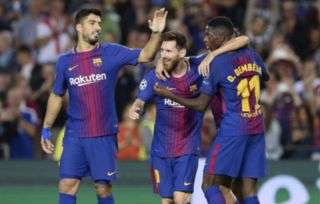 Barcelona couldn’t find a way past Lyon in the first half of their Champions League clash on Tuesday night, and Luis Suarez found himself coming under fire from fans.

The Catalan giants were in France for the first leg of their last-16 tie on Tuesday night, and they certainly had opportunities to grab a crucial away goal in the opening 45 minutes.

However, having gone into the break goalless, it left them open to criticism on Twitter, with Suarez seemingly facing the brunt of it, as seen in the replies below.

The 32-year-old stalwart has been in decent form so far this season, scoring 16 goals and providing eight assists in 32 appearances in all competitions.

Nevertheless, more will be expected from him on the big stages to offer a clinical presence up front. Based on the reaction so far on Tuesday night, it’s fair to say that he isn’t particularly popular with many Barcelona fans.

Despite that though, the reigning La Liga champions will undoubtedly be pleased to take a positive result back to the Nou Camp, and so it remains to be seen if they can take their chances in the tie to secure safe passage through to the quarter-finals.

While Suarez toils, Lionel Messi will undoubtedly be hoping to make his mark at some stage as the Argentine icon has proven to be decisive on countless occasions in the past.

Valverde and Suarez OUT NOW

Can you ask Suarez what he wants?

Coutinho or Malcom would help out a lot. Take out Suarez please

Not bad , make change in second half ,Suarez OUT coutinho IN?

Search for a better striker in the summer please?

I would do better than Luiz Suarez at the moment