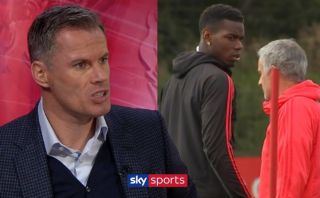 This old video of Jamie Carragher talking about Paul Pogba’s form earlier this season is doing the rounds after his spectacular recent improvement for Manchester United.

The France international did not look himself for much of his United career under previous manager Jose Mourinho, but has developed into a truly world class performer under interim boss Ole Gunnar Solskjaer.

Carragher, however, did not believe a change in manager would improve Pogba when he discussed the situation earlier this season.

Turns out the pundit got this one spectacularly wrong, with Pogba’s improvement coming ever since Solskjaer arrived in the dugout – just as many speculated would happen due to the negative tactics deployed by Mourinho that didn’t seem to fit the former Juventus man’s game at all.

In fairness, Carragher is probably not the only pundit who didn’t see this coming, but it’s strange quite how convinced some people were that his lack of form was simply down to haircuts and dancing…

Jamie Carragher couldn’t have been more wrong about Paul Pogba if he tried????? pic.twitter.com/svnRYca9BA