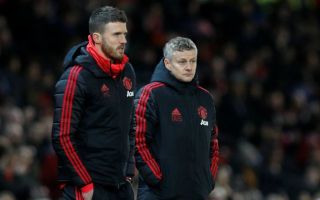 Manchester United coach and club legend Michael Carrick doesn’t tweet that often, but took to social media this morning to send a special message to the club’s fans.

The former England international has been part of United’s superb recovery under interim manager Ole Gunnar Solskjaer, and was clearly in awe of the away support at Stamford Bridge yesterday evening.

Man Utd extended their superb run under Solskjaer with a 2-0 win at Chelsea in the FA Cup last night, and Carrick sent a special message to the club’s fans for the way they cheered the team on in west London.

United take on Liverpool next in what will be another big game, with their bitter rivals going for the Premier League title this season after some superb performances under Jurgen Klopp.

Carrick, however, says he wants more of the same from the home crowd as they host the Reds at Old Trafford and look to disrupt their march towards a first title since 1990.

To everyone single one of you behind the goal last night.
Nonstop from start to finish. The noise and energy was incredible.
Would have loved to be in there myself.
Thank you ??
Same again Sunday please ???