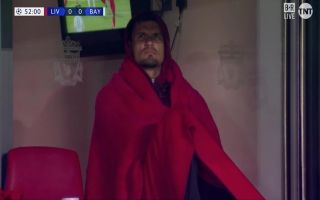 Liverpool defender Dejan Lovren sent viewers into meltdown this evening when he was pictured rocking a blanket with the hood up, at least the blanket was red.

In the 52nd minute of the match the BT Sport cameraman produced one of the biggest moments of the game by panning the camera to Lovren in all his bedtime story glory.

The game has been jam-packed full of clear-cut chances but neither side has managed to hit the back of the net somehow, both sets of fans will be extremely frustrated if the game ends goalless.

Check out Lovren watching from the bench in his hood below:

Check out some reaction to Lovren’s bizarre choice of clothing below:

Your best defender in the world…. ?

dont we have heating? hes inside and still wrapped up

Was looking up like “who’s that cunt on the big screen? Oh”

Lovren looks like he’s just seen the sun start to come up at a gaff after a mad one pic.twitter.com/4AUked016x

Why does Lovren look like he should be lost in the woods rather than lost in the defence? pic.twitter.com/t2jyjapZxD