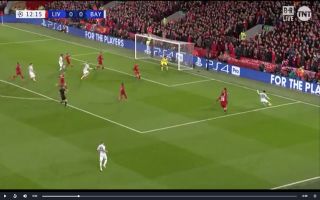 Liverpool goalkeeper Alisson was called into action just 12 minutes into the first leg of Liverpool’s last-16 tie against Bayern Munich this evening.

Former Arsenal youngster Serge Gnabry bamboozled Andy Robertson with his dazzling footwork and Gnabry definitely showed the Scotsman a clean pair of heels, the 23-year-old fired a cross into the box which was met by Robert Lewandowski.

Fortunately for the Reds, Lewandowski’s strike was straight at Alisson and the Brazilian managed to stop the ball from hitting the back of the net.

Check out the goal/incident below:

It’s been quite a back and forth start to the game, both sides have had their chances – who will rue their missed efforts at the end of the night?