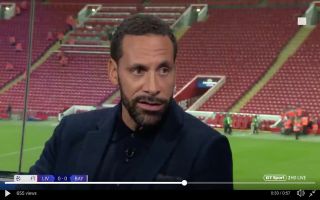 Liverpool’s midfield general Fabinho stepped into the heart of defence in the Reds’ last-16 tie against Bayern Munich this evening. The Brazilian pulled off a defensive masterclass.

Fabinho steadied the ship for Liverpool this evening and the 25-year-old looked right at home in the heart of defence, for the most part of the game the Reds backline marshalled Bayern superstar Robert Lewandowski expertly.

Fabinho came into tonight’s match with the threat of Lewandowski and the rest of Bayern’s attack on his mind, as well as knowing that he would be the man his teammates would look to for assurance in the same way they do to Virgil van Dijk – who missed tonight’s clash through suspension.

Fabinho can be very proud of his performance tonight, after a slow start with the Reds the versatile star has established himself as one of the first names on Jurgen Klopp’s team-sheet.

"He was fantastic. he did an admirable job. Every question that was asked from him, he answered."

"Very, very good player, he starts every game now which means something."

It takes some player to fill the boots of Virgil van Dijk, hats off to Fabinho. Liverpool’s attention will now turn to a battle for bragging rights against Manchester United which also has the potential to disrupt the Reds’ chances of winning the league and United’s hopes of finishing in the top four.