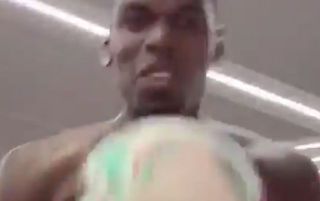 Man Utd defender Eric Bailly will want to forget this in a hurry after he was the victim of a cheeky nutmeg from Paul Pogba.

The pair were filmed messing around in the dressing room with Romelu Lukaku casually making a brief appearance too.

However, it was Pogba’s nutmeg on Bailly that drew the big reaction, with the Frenchman clearly delighted with his work, as seen in the video below.

The man behind the camera was equally as excited about it as Pogba seemingly can do no wrong at the moment as he continues to shine on and off the pitch.

The World Cup winner was on the mark yet again on Monday night, scoring in United’s 2-0 win over Chelsea at Stamford Bridge in the FA Cup.