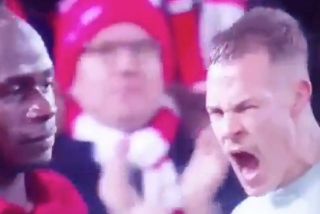 One of the more fascinating battles in Liverpool’s encounter with Bayern Munich on Tuesday night saw Sadio Mane go up against Joshua Kimmich.

The two European giants clashed in the last-16 of the Champions League in midweek at Anfield, with Kimmich picking up an early yellow card which in turn will see him miss the second leg.

Despite the fact that he was walking a tightrope thereafter, the German international showed his defensive quality up against Mane by showing great patience and alertness to snuff out the danger he posed, as seen in the video below.

The 24-year-old was clearly pumped up as a result as he let out a scream in the direction of the Liverpool winger, and in fairness, for a defender, that had to have felt good.

However, Mane couldn’t help but have a chuckle over his reaction, as the Reds ace will hope that he can get the better of his rival in their ongoing mini-battle and prove to be decisive for the Merseyside giants.

In this moment…..Kimmich became my current favourite defender right now