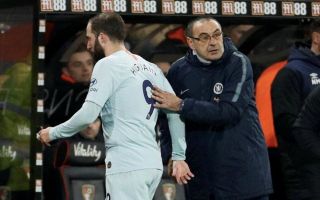 Chelsea manager Maurizio Sarri has reportedly lost the dressing room at Stamford Bridge as his players turn on him after their latest defeat.

The Blues were beaten 2-0 by Manchester United on Monday night, exciting the FA Cup and continuing a dire recent run of form.

According to the Independent, it seems players’ frustrations are starting to show, with a manager who initially impressed his squad now losing them due to giving them too many complicated tactical instructions.

Chelsea look lost on the pitch and don’t seem able to carry out Sarri’s ideas, which worked far better at his previous club Napoli than they have in his brief time in the Premier League.

It remains to be seen how much longer the Italian tactician can last, but it seems he could benefit from changing his ways slightly.

Opinion: Josep Maria Bartomeu will go down as the worst president in Barcelona’s history

Barcelona could rival Arsenal for transfer of 21-year-old forward

Sarri is yet to really show any indication that he’s willing to do that, and unfortunately that will probably mean more performances like the one last night or in the recent 6-0 defeat against Manchester City.

CFC surely need to make a decision soon as they have a shot at silverware this weekend with a game against Man City in the Carabao Cup final – a match they will surely just lose heavily if they stay as they are.