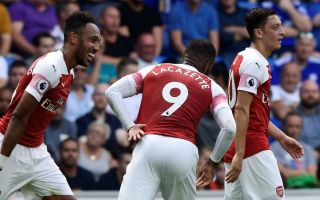 Arsenal could reportedly be open to selling Alexandre Lacazette if the right kind of offer comes in in the summer transfer window.

This surprise revelation comes from football.london, who state Unai Emery doesn’t particularly like playing with a front two, with Pierre-Emerick Aubameyang another reliable option up front.

This could mean sacrificing Lacazette, who still has a decent potential sale value in the transfer market due to being younger than Aubameyang, who has mostly been first choice ahead of the Frenchman anyway.

Still, Lacazette has almost always performed well when included in the team, and seems a player with plenty to offer at this level – unlike so many other unconvincing talents in the Gunners’ attack.

Unsurprisingly, this latest Arsenal transfer gossip has not gone down at all well with many fans on Twitter, who are threatening riots and similar if the 27-year-old is shown the Emirates Stadium exit door this summer.

First Alexis then Cazorla then Ramsey now if we lose Özil and Lacazette I’m gonna vomit. Swear we’re trying to transform ourselves into Stoke. https://t.co/szkcqQrXTC

reports now coming that Lacazette could be sold in the summer. I swear I will get on a plane and take Emery out of that club my fuckin self. this is insanely stupid.

If we sell Lacazette I'm done as fan mate I swear down!! #Arsenal #kroenkeout #shitshow

If we sell Lacazette we riots in streets all over the world.

If Lacazette is sold in the summer then there’ll be riots and the club know this. He’s one of the very few at the club that wears the Arsenal shirt with pride. Gives 100% every time he steps foot on the pitch. If you want Lacazette sold, you need to get your head checked. pic.twitter.com/Oh7JlufCZC

If Lacazette is sold we riot

If we sell Lacazette I swear………

We better not let Lacazette leave

reports now coming that Lacazette could be sold in the summer. I swear I will get on a plane and take Emery out of that club my fuckin self. this is insanely stupid.