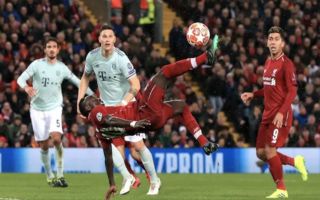 Bayern Munich mocked Liverpool attacker Sadio Mane for his failed overhead kick attempt against them on Twitter, during a 0-0 draw at Anfield.

The two sides met in the Champions League on Tuesday evening for the first leg of their last 16 tie, which ended goalless after a tense 90 minutes on Merseyside.

Chances were few and far between but Liverpool pressed hard for openings, particularly in the first half, which is when Mane tried to acrobatically covert a deflected ball into the box.

Unfortunately for the Senegalese star, his effort failed to hit the target and Bayern’s social media team were quick to jump on his error, comparing the strike to the way FIFA 19 has set up it’s shooting settings this year.

Overhead kicks are almost impossible to control on FIFA 19, with overpowered shots missing the target by miles during general play and Bayern’s sarcastic post used that feature as a way to take a light swipe at Mane.

Liverpool are aiming to go one better than last year’s final appearance in this year’s Champions League, but they will now face a tough second leg against Bayern in Germany on March 13 as they eye a quarter-final spot.

The Reds are also gunning for the Premier League title, with a huge clash at Old Trafford against arch-rivals Manchester United up next on Sunday.

Supporters will hope that Jurgen Klopp’s men can bounce back from their midweek disappointment quickly and that Mane can rediscover his goalscoring touch to sink the Red Devils in their own backyard.