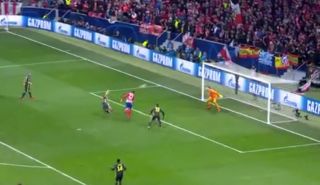 Alvaro Morata just can’t get a break, with what he thought was his first goal for loan club Atletico Madrid ruled out by VAR.

Watch the video of the incident below, with the Chelsea flop looking like superbly heading Atletico into a 1-0 lead over his old club Juventus.

However, moments later the Spain international’s joy turned to despair as it was ruled that he pushed Giorgio Chiellini before getting his shot away.

It looks very harsh to us when you watch it in real time, even if there is some contact.

Should this have stood?