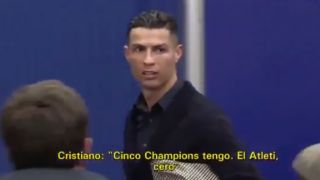 Juventus star Cristiano Ronaldo could be seen mocking Atletico Madrid fans during their Champions League match, and he was at it again after the game as well.

This is all rather Jose Mourinho-esque from Ronaldo, who was not at his best against Diego Simeone’s side and who seems to want to divert attention away from that.

It remains to be seen if Ronaldo and co. can turn things around in the second leg of this tie after Atletico won 2-0 on Wednesday evening.