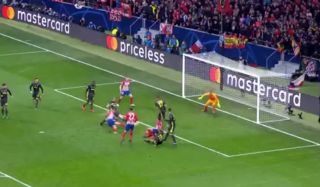 Jose Gimenez pounced on a loose ball in the penalty area to make it 1-0 to Atletico Madrid in tonight’s big game against Juventus in the Champions League.

The Uruguayan defender was the quickest to react after some questionable Juve defending from an Atletico corner in the 78th minute of tonight’s game.

Moments later, Diego Godin slammed a second to make it 2-0 and give Atletico a major advantage going into the second leg of a tie that looked too close to call beforehand.

If it stays like this it’ll take something special from Cristiano Ronaldo and co. in the next game in Turin…