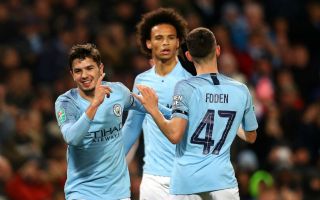 Manchester City take on Schalke this evening and their starting XI has just been confirmed for the big game.

Leroy Sane has been benched against his old club by Pep Guardiola, in what will no doubt be a disappointment for him on his return to Germany.

Apart from that, there are few surprises from Guardiola, though there’s some debate about what kind of formation the Spanish tactician is using for this game.

Known to chop and change from time to time, it looks like this could be a back three tonight, with Kyle Walker dropping in to play as one of the trio of centre-backs alongside Nicolas Otamendi and Aymeric Laporte.

How we’re lining up in the #UCL tonight! ?

This could mean Raheem Sterling and Bernardo Silva are almost playing as wing-backs, in what would be a very attack-minded move by City if that is indeed what they’re going for.

The Premier League champions should be big favourites against Schalke, so fans will hope Guardiola isn’t going a bit too gung-ho with this line up.