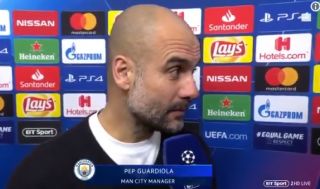 Manchester City manager Pep Guardiola criticised his players after the 3-2 win over Schalke in the Champions League tonight.

Despite a thrilling comeback from 2-1 down, City were perhaps unconvincing in certain areas against Schalke, having conceded two penalties and seen Nicolas Otamendi sent off in Germany.

While City did enough to win tonight, it does perhaps raise questions about their ability to go all the way in this competition.

Bigger tests lie ahead for Guardiola’s side, and that’s why he didn’t seem the happiest man despite the result tonight:

"We are not ready to fight for the latter stages, that is the reality."