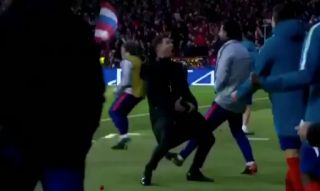 Pretty much everyone is sharing this incredible Diego Simeone celebration of one of the Atletico Madrid goals against Juventus tonight.

The Spanish giants grabbed themselves a big 2-0 victory over Cristiano Ronaldo’s Juve, and Simeone was clearly absolutely loving it.

Watch the videos and take a look at some of the reaction below as Simeone gestured towards his crotch in celebration.

We’re not quite sure what inspired this, but the Argentine always seems to make for great television.

From Simeone to Ronaldo fans. pic.twitter.com/sZBXHkDFvp

I love the passion of Simeone lol https://t.co/pa5uyvrrkL