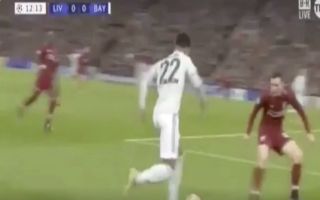 The Bavarians earned a credible 0-0 draw away from home in the first leg of their last 16 Champions League clash against the Reds and they were even close to escaping with a huge win.

However, ultimately in a game of few clear cut chances, neither side managed to take control of the tie in any meaningful way, with the second leg due to take place at the Allianz Arena on March 13.

Bayern’s bright spark on the night was former Arsenal starlet Gnabry, who ruined Robertson in one particular moment on the right-wing with a superb piece of skill, before firing the ball into the box.

Check out a clip of the German showing just how dangerous he can be when flying into the final third below, via Twitter.