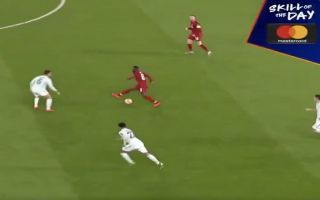 Liverpool midfielder Naby Keita produced a brilliant moment of skill against Bayern Munich in the Champions League on Tuesday evening.

The Reds hosted the German champions at Anfield in the first leg of their last 16 European tie and the second leg at the Allianz Arena on March 13 is now intriguingly poised after a 0-0 draw on Merseyside.

Jurgen Klopp’s men only managed two shots on target while Bayern failed to hit the target with any of their efforts, after a tightly contested game which saw neither side give anything away defensively.

Keita, who has faced his fair share of criticism during his debut season in English football, was impressive in the middle of the park and he even showed off his amazing dribbling ability at one point.

After picking the ball up close to the centre circle he glided past Thiago and Serge Gnarby with a stepover and subtle drop of his shoulder, much to the delight of the Liverpool faithful.

If I had known that Liverpool were playing Iniesta in midfield, I wouldn’t even care Van Dijk’s not playing. #Keita #Anfield #liverpool pic.twitter.com/IHQzmOtlzn

Naby Keita has to be allowed to dribble. pic.twitter.com/AJGd7XTj6x