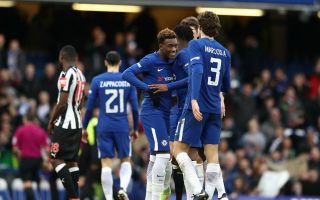 Chelsea manager Maurizio Sarri has assured Callum Hudson-Odoi that he’ll get more games next season and that his playing time will generally increase as time goes on.

The 18-year-old’s situation at Stamford Bridge has been dominating headlines for much of this season, with Bayern Munich linked with the youngster by Bild back in January.

It’s fair to say this is a lot of attention for a player with such little experience, and Sarri once again answered questions about Hudson-Odoi after tonight’s Europa League win over Malmo.

The England youth international did actually play this evening, scoring a well-taken goal against the Swedish side, showing he does perhaps deserve to be used more by Sarri.

Chelsea don’t have the best track record in terms of promoting youth from their academy, but their manager has insisted that he sees a future for Hudson-Odoi at Stamford Bridge, whilst already reminding him that he’s played a lot for a player of his age this season.

‘We have Pedro, Willian, Hazard, it’s not easy for a young player to play with consistency as his team mates. I want to remember you that Callum played 14 matches, there isn’t in England another player with 14 matches in the first team. I think we are using in the right way,’ Sarri is quoted by football.london.

Callum Hudson-Odoi has shone when he’s played for Chelsea

‘The 20 matches in this season will become 30 in the next, then 40 in two years. The club must decide because if I am at the club and want Callum on the pitch, I must sell another winger or the manager is in trouble.’

It remains to be seen if this will be enough to persuade Hudson-Odoi to stay at Chelsea following the links with Bayern in the most recent transfer window, while other clubs will also surely soon take notice of his situation.