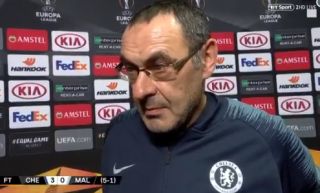 Chelsea manager Maurizio Sarri has denied rumours that he’s held talks over leaving Stamford Bridge to become the next manager of Roma.

This report came from the print edition of La Repubblica, translated by Calciomercato, but Sarri pretty much laughed off the story.

The Italian tactician’s Chelsea future does look in some doubt at the moment, but he insisted he wouldn’t be talking with other clubs while he has a contract with the Blues.

The Guardian have been among the sources to state the former Napoli manager could be shown the door if his side lose the Carabao Cup final to Manchester City at the weekend.

"I read something about a dinner with Franco Baldini, but I think he's in South Africa, so it's very difficult to have dinner with him." ?

Maurizio Sarri addresses the rumours that he has been approached by Roma… pic.twitter.com/WF5PMl9a5e