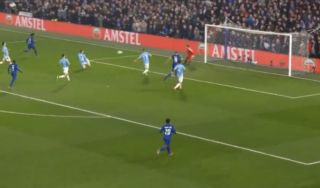 Chelsea have gone 1-0 up against Malmo in tonight’s Europa League clash thanks to a well-worked Olivier Giroud goal.

The France international had an easy finish after the fine midfield play of N’Golo Kante, who charged forward to great effect in the build-up, showing what he can do in a more attack-minded midfield role despite not quite looking himself there for much of this season.

Still, Kante shone in this move as he played in Willian, whose low cross was then turned in by Giroud from close range to surely kill this tie.

Chelsea won 2-1 against Malmo in the away leg last week and despite a rocky start this evening, can surely relax now and hopefully turn on the style in the closing stages…