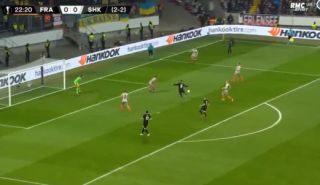 Chelsea fans may want a look at this superb strike from Luka Jovic following transfer rumours linking him with the Blues.

Bild recently claimed Chelsea were preparing to try a £39million move for the young Serbian in the summer, and goals like this show why.

Jovic has quickly become hot property after his fine form in the Bundesliga, and he’s also added this effort to his collection in the Europa League tonight.

The 21-year-old absolutely lashes home this low cross to give current club Eintracht Frankfurt a 1-0 lead, and if he carries on like this he’s likely to attract more transfer links with Chelsea and other top clubs.

Jovic with a no-nonsense finish to put Frankfurt in front. They are leading 2-0 at the moment. pic.twitter.com/TJdLIK4bCV

Luka Jovic with his 20th goal of the season #SGEShakhtar