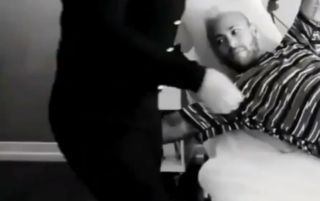 It’s fair to say this video of Neymar and his Mum is getting a lot of attention – for understandable reasons.

We can’t confidently say whether or not this is more of a thing in Brazil, but watch this clip below as the injured Paris Saint-Germain star gets a bit touchy-feely with his mother.

First he can be seen stroking her backside, and later slapping it, with basically no reaction from her at all.

Whatever does it for you, Neymar. Here’s the video and some reaction to it as it does the rounds on social media…

It’s gonna be real tuff on Neymar’s legacy, when kids in 20 years time are gonna remember him for missing matches for his sister’s birthday and caressing up his mum

A lot of talk of Martial and his off the pitch antics. Nowhere near as bad as Neymar who's not happy with just fucking his sister, he's now touching up his mums arse. ? ? pic.twitter.com/5t2kype6RO

See how Neymar casually slapped his mum's behind. I'm dead ??

What exactly is wrong with Neymar, tapping your mum's backside is just not right idc. Not to talk about how he plays with his sister

What did Neymar just do to his mum? pic.twitter.com/Wn1QBKmWe1

Cana believe Neymar is cheating on his sister with his mum. creepy wee cunt.

Neymar deserves twice the amount of abuse Bizkit got for this seeing as though he’s like this with his mum AND his sister? https://t.co/0zm9Xo0WR0

Neymar slaps the mum on the ass.. Shits weird AF..

Neymar is flogging his mum & sister

neymar shags his mum and his sister….pass it on https://t.co/6BHI1k5fMi