Liverpool defender Virgil Van Dijk says he wants to be remembered as a club legend, insisting that the current squad is capable of achieving greatness.

Since completing a record transfer to Anfield from Southampton in January 2018, the Dutchman has emerged as one of the best defenders in European football.

Liverpool managed to reach the Champions League final last season, which was in no small part down to Van Dijk’s influence in the heart of the defence and he has also been the figurehead behind a Premier League title charge this term.

The Reds are joint top of the table alongside Manchester City at the moment, with a game in hand on the reigning champions to take in next against Manchester United on Sunday.

Jurgen Klopp’s men are also still going strong in Europe this year, with the second leg of a last 16 tie against Bayern Munich to look forward to in March.

Van Dijk sat down with BBC Sport earlier in the week for an in-depth interview during which he discussed his transfer to Liverpool and his aims for the future, revealing he is targeting legendary status at the club.

The Netherlands international responded confidently when asking how he would like to be remembered at the end of his career, stating: “As a legend of Liverpool. I want to achieve amazing things here. We have a fantastic squad, we have everything, we have all the tools.

“They went all out to get me and I want to give everything for them. Before I started training [with the club], I went to the game against Leicester [in December 2017]. I was in the boardroom and met so many legends, great players who played for a beautiful club. 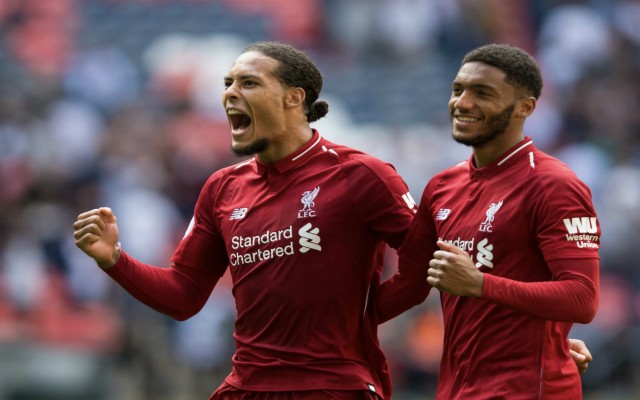 “When you play for this club, you’ll always be welcome as you’ve been part of the family. It’s one of the reasons I definitely wanted to play for the club.”

Van Dijk’s latest comments will surely be music to the ears of Liverpool fans across England, safe in the knowledge that their team’s defence is in good hands with the 27-year-old leading by example.

He will be expected to start against United this weekend, after missing the 0-0 draw against Bayern in the first leg of their Champions League tie on Tuesday evening.

The Red Devils could provide Liverpool with one of their biggest tests of the season so far, but with City distracted by the Carabao Cup final, Klopp’s men have a huge opportunity to seize the initiative in the race for the Premier League crown.