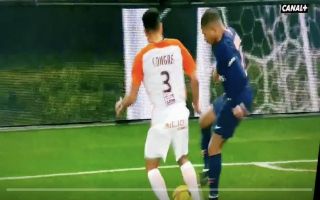 Paris Saint Germain attacker Kylian Mbappe showed off his dribbling skills once again during a 5-1 thrashing of Montpellier on Wednesday evening.

The French champions extended their lead at the top of Ligue 1 to 15 points after their latest victory, thanks to goals from Layvin Kurzawa, Angel Di Maria, Christopher Nkunku, a Vitorino Hilton own goal and a late Mbappe strike.

The World Cup winner continued his run of fine performances as he ran the Montpellier defence ragged, with one moment, in particular, standing out as a prime example of his ability on the ball.

Mbappe picked up possession on the left-hand side before roasting the full-back in front of him with a sublime nutmeg, which was well received by the Parc Des Princes crowd.

Check out the 20-year-old’s outrageous skill below, via Twitter.