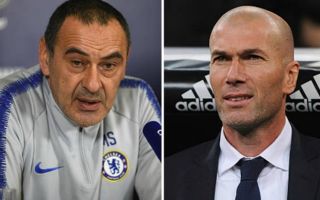 Chelsea would reportedly consider Zinedine Zidane as an option to replace Maurizio Sarri if a change is made, but they could miss out on the Frenchman.

Sarri is under growing pressure due to Chelsea’s poor form in recent times, which has seen them drop out of the top four in the Premier League and crash out of the FA Cup.

Further, question marks have been raised over the Italian tactician’s ability to successfully implement his preferred style of play, as it has undoubtedly hit stumbling blocks in recent months.

He now faces a crucial clash with Man City in the League Cup final on Sunday, while the race for a top four finish continues.

As noted by Sky Sports earlier this week, speculation was growing over a sacking and which possible replacements could be lined up, with Zidane and Frank Lampard specifically mentioned in that report.

After his trophy-laden stint in charge of Real Madrid, it’s no surprise that the French icon would be in the running, having guided the Spanish giants to a La Liga title, three Champions League triumphs, two UEFA Super Cups and two FIFA Club World Cups.

However, as per Calciomercato, via the front-page of Corriere dello Sport on Friday, it has been suggested that Zidane is also now being considered the top option to replace Massimiliano Allegri at Juventus at the end of the season.

Despite remaining on course for an eighth consecutive Serie A title, four of which have come under Allegri’s stewardship, the defeat to Atletico Madrid in the Champions League this week threatens to leave them falling short in Europe once again.

For such a dominant side domestically, their continued failure in Europe will be a major frustration, and so that could now push them into making a change this summer.

Zidane evidently has a winning pedigree in that competition, and coupled with his history with the Turin giants having played for them between 1996 and 2001, it could be a difficult option to turn down if they do make a move.