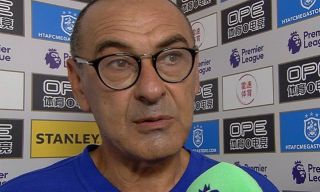 Chelsea secured their place in the last-16 of the Europa League after a 3-0 win over Malmo in the second leg of their tie on Thursday night.

Goals from Olivier Giroud, Ross Barkley and Callum Hudson-Odoi helped secure a 5-1 win on aggregate, in what was undoubtedly a crucial win.

Following their defeat to Man Utd in the FA Cup earlier this week coupled with the League Cup final against Man City this Sunday, Maurizio Sarri would undoubtedly have been desperate for a confidence boost for his side.

While he’ll hope that’s what the effect of their win is, the Italian tactician defended Jorginho after the game, with the midfield ace getting an indifferent reception after coming off the bench, as seen in the video below.

Sarri though has urged Chelsea fans to understand just how important the former Napoli ace is to their style of play and their bid to be a successful side this season.

“I think that in the first 30 minutes we understood why Jorginho is very important for our team,” he said, as noted by Sky Sports. “We were in trouble to exit from our half with the pressing.

“With Jorginho, it is easier, I think. I would hope that our fans would be able to understand that Jorginho for us is really a very important player.”

Although Jorginho has struggled to have a decisive impact for Chelsea so far this season, he still plays a fundamental role for Sarri in the heart of his midfield.

However, with the pressure on and following some poor results, it’s natural that those who are seemingly underperforming in the eyes of the supporters are targeted.

Sarri will hope though that Jorginho can begin to showcase his importance, starting this weekend in their crunch clash with City given that there is silverware on the line.