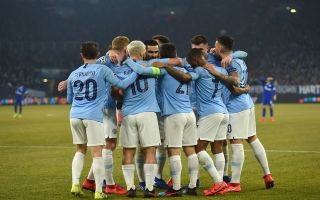 Manchester City stars Raheem Sterling and Kyle Walker couldn’t help but troll two of their teammates after they managed to pull off an impressive comeback win vs Schalke.

After City’s late heroics against Schalke on Wednesday evening, match-winner Raheem Sterling and full-back Kyle Walker somehow managed to one-up their performance on the pitch by by showing off a strong social media game after the match.

The butt of Sterling and Walker’s jokes were their teammates, Oleksandr Zinchenko and Kevin de Bruyne. The pair have been likened as twins by many fans (not just City’s), and Sterling and Walker pointed this out with their tweets after the game.

Check out pair’s hilarious replies to City’s official account below:

I see no difference tbh

The mood in Pep Guardiola’s dressing room seems higher than ever, the side will need to remain in high spirits if they are to have any hope of beating Liverpool to the title.

The two sides are even on points (with City ahead on goal difference), but Liverpool have a game in hand – although that is against their bitter rivals Manchester United. Sunday’s game has serious title implications.