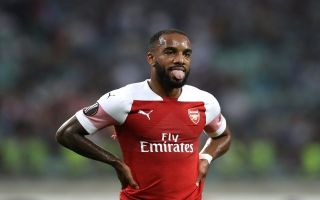 Arsenal forward Alexandre Lacazette has been handed a further two-game ban by UEFA for elbowing an opponent in the first leg of Arsenal’s tie vs BATE Borisov.

According to Sky Sports News, the Frenchman will miss both legs of Arsenal’s round of 16 clash against Ligue 1 side Rennes.

Whilst Arsenal would have been hoping that Lacazette would only serve a one-game suspension for his sending off, UEFA chiefs clearly thought that the Frenchman’s actions were worthy of a three-game ban.

Lacazette’s strike partner Pierre-Emerick Aubameyang will have to shoulder the responsibility for the Gunners in Europe after this news.

Check out some reaction to the news from Arsenal fans below:

So Unfortunate…our best player by a mile?

How does that work ? Ronaldo got a straight red and missed 1 game. Why does laca miss 3 matches.

The Gunners may need to triumph in the Europa League considering the fierce competition they face for a top four spot in the Premier League.

It looks as though they won’t beat Solskjaer’s rejuvenated Manchester United to fourth place, so Arsenal’s only hopes of securing Champions League qualification for next season will be from winning the Europa League.