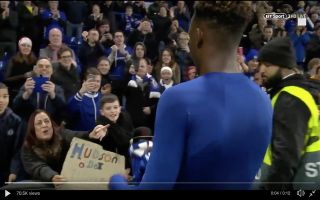 Callum Hudson-Odoi continues to win the hearts of Chelsea fans, not just with his eye-catching performances on the pitch – but his humble character off it.

The Blues comfortably beat Swedish side Malmo in their Europe League Round of 32 tie, Chelsea won the second leg 3-0 meaning that the west London club ran out as 5-1 winners on aggregate.

Hudson-Odoi notched himself a goal in the 84th minute with a well-taken finish but it was his actions at the final whistle that established him as a fan favourite.

The 18-year-old handed his shirt to a young fan who made a sign asking for it, it’s great to see a talented young lad that is so humble.

It's the little things ? pic.twitter.com/ZaVT52gUEA