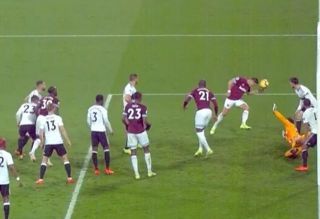 West Ham secured a 3-1 win over Fulham on Friday night, but there was controversy over their equaliser as Javier Hernandez appeared to handle the ball into the goal.

The visitors took an early lead through Ryan Babel, but they were unable to protect it for long as the Hammers eventually ran out winners.

However, as seen in the video below, it appeared as though Hernandez got the last touch with his hand to bring West Ham level as he directed the ball into the back of the net from close range.

Naturally, there were calls for VAR from some viewers in the comments section, but that will be of little consolation to Fulham and Claudio Ranieri as they suffered more disappointment in their bid to avoid the drop this season.

Nevertheless, after replays showed that Hernandez handled, there will undoubtedly be plenty more discussion and debate over the controversial incident over the weekend.

#WHUFC are level, but they're given a helping hand by Hernandez to get their equaliser.