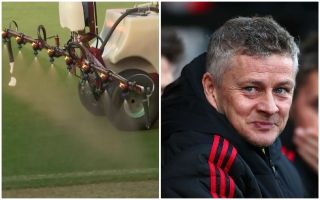 Some football fans were astonished to find out that Manchester United had sprayed their Old Trafford pitch with garlic in the buildup to their crucial clash against Liverpool.

According to Sky Sports, the root vegetable helps stop parasites from damaging the roots of the grass, United, as well as whole host of Premier League clubs have been using this technique once a week for five years.

Garlic keeps the vampires away and our pitches safe – it’s ranking as a vegetable has certainly gone up after this revelation.

Of course the downside of using garlic to treat the pitch is that the stadium can start to smell quite horrid, the report highlights that the stench can be smelled from half a mile away depending on the wind.

Fortunately for United’s visitors this isn’t expected for tomorrow’s clash.

Take a look at the ‘Theatre of Dreams’ being sprayed below:

They’ve had a stinker! ?@ManUtd have been spraying garlic on the Old Trafford pitch ahead of their huge clash with @LFC on Sunday.

Why do @ManUtd use garlic on the Old Trafford pitch? https://t.co/4VLqBwaZ6Y pic.twitter.com/t1jLQ3t43S

Tomorrow’s clash is arguably one of the biggest games of the season and the implications it can have on both teams is massive.

Should Solskjaer get the better of Jurgen Klopp, Liverpool’s hopes of winning the title will take a hit – a defeat for the Reds will literally mean that they will have to go head to head with City in the run-in to the end of the season.

A loss for United on the other hand is just as damaging – Solskjaer has defied the odds to get United into fourth place in the league and a defeat could see Arsenal or Chelsea take advantage and snatch their top four spot away from them.

Check out some reaction to revelation below:

Parasites due on Sunday they’ve got that one right

Another excuse for klopp

Salah must be allergic to Garlic and it’s an attempt to keep him on his feet?

Klopp: we lost today, here at old Trafford, not because the grass was too long, or too short, or even too wet. We lost today because it smelled like garlic.

Garlic helps to kill bacteria and parasites which is quite appropriate considering who the visitors are this Sunday! ?

This fan pointed to the time that Luis Suarez bit Chelsea’s Branislav Ivanovic, Liverpool’s attack are frightening enough, imagine if they were vampires…

Incase Suarez turns up the vampire

Staying on the topic of tomorrow’s clash between the heated rivals, take a look at what United legend Eric Cantona had to say when he was asked who he’d want to win the league between City and Liverpool. The Frenchman still has that charismatic character…