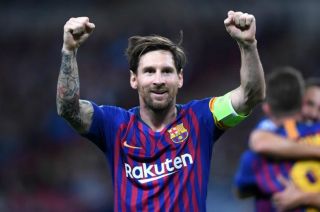 Lionel Messi was unsurprisingly on the scoresheet for Barcelona in their clash with Sevilla on Saturday, but he broke a new record in the process.

Jesus Navas had given the visitors the lead, but it lasted just four minutes as Messi produced a stunning finish to find an equaliser, as seen in the video below.

Unfortunately for Barcelona coach Ernesto Valverde, his side were behind again before the break as Gabriel Mercado made it 2-1, and so the La Liga leaders have it all to do to turn things around in the second half.

However, there was another memorable landmark for Messi, as his goal on Saturday was his 26th against Sevilla in La Liga, and as noted by the tweet below, that’s a new all-time record against a single opponent.

Further, that’s now 31 goals in 32 games this season alone, as the 31-year-old continues to inspire Barcelona.

Whether or not he can repeat the trick again this weekend to ensure that his side avoid defeat remains to be seen, but on an individual level, Messi continues to produce the goods and writes his name into the history books.

Undoubtedly of more importance to him though, he will be desperate to avoid seeing Barcelona fumble the opportunity to open up a 10-point gap at the top of the table ahead of Atletico Madrid playing on Sunday.

What a goal by Leo Messi! pic.twitter.com/l37qI08p9W

2?6? goals against Sevilla in @LaLigaEN
? It’s a new all-time record against a single opponent!