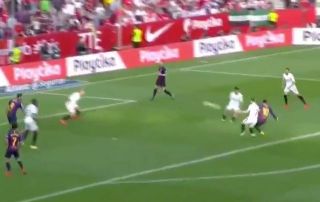 Not content with scoring one superb goal against Sevilla, Lionel Messi repeated the trick in the second half to equalise for Barcelona again.

The Catalan giants twice fell behind at Sevilla, with Jesus Navas and Gabriel Mercado scoring either side of Messi’s sublime first.

With the pressure building after the break as Barcelona looked to avoid a potentially damaging defeat in the La Liga title race, Messi stepped up yet again to produce a moment of class, as seen in the video below.

This time with his right foot, the Argentine icon placed his effort perfectly into the top corner to find the back of the net, showcasing that he can do it with his less favoured side too.

That’s now 32 goals in 32 games and counting so far this season, as the 31-year-old continues to prove that he can bail Barcelona out when they desperately need him to.

That is perhaps concerning to an extent as others need to step up, but for now, Ernesto Valverde will undoubtedly welcome it with both arms.

My god, he does it again! What an unbelievable goal by Leo Messi. pic.twitter.com/BekAnWqPxh

Its a bird, its a plane, No its LIONEL MESSI DOING WHAT HE DOES BEST!!!!