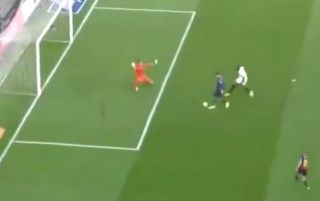 Lionel Messi put on a masterclass in finishing on Saturday as his hat-trick helped secure a 4-2 win for Barcelona at Sevilla.

The Catalan giants twice fell behind against their rivals, with Jesus Navas and Gabriel Mercado scoring either side of Messi’s first in the opening 45 minutes.

However, the 31-year-old scored twice after the break to register his 50th career hat-trick and to secure the win, with Luis Suarez netting a late fourth to make it safe.

Messi has now scored an incredible 33 goals in 32 games so far this season, as he continues to produce moments of absolute quality when his side need him most.

Ernesto Valverde will be relieved as the win moves them 10 points clear of nearest rivals Atletico Madrid at the top of the La Liga table ahead of their game on Sunday.

Nevertheless, it took another Messi masterclass to ensure that they didn’t slip up this weekend, as the Argentine icon put on a show, as seen below with a delightful finish for his third.

#HatTrick from the one and Only! #Messi ? pic.twitter.com/BxrSv7qcl4