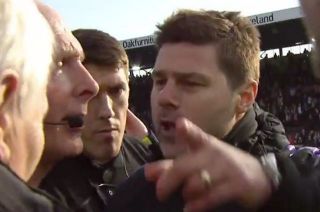 Tottenham fell to a 2-1 defeat to Burnley on Saturday, but boss Mauricio Pochettino was left incensed by referee Mike Dean after the full-time whistle.

The Argentine coach was seen looking less than pleased with Dean initially as he made his point about a controversial moment in the game, but as he went to head back to the dressing room, he quickly turned back to the official.

As seen in the video below, it would appear as though he reacted to something that was said as it seems as though he is repeatedly asking Dean what he said as he acknowledges that the camera is now on them.

It remains to be seen what comes from this incident, but clearly Pochettino was left furious while he wouldn’t have been in a particularly great mood anyway considering the result.

The Spurs boss eventually made his way off the pitch, but while it remains to be seen what, if anything, was said by Dean, the FA will surely be set to look into it further as Pochettino confronting the referee in this manner won’t be ignored.

Fair to say Mauricio Pochettino is not happy with referee Mike Dean after his side’s loss at Turf Moor! ?