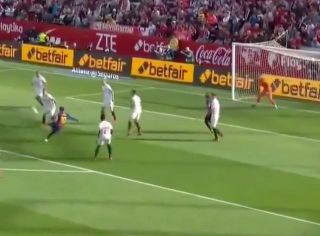 Just minutes after falling behind at Sevilla, Lionel Messi produced a moment of absolute class to drag Barcelona level.

Jesus Navas had given the hosts the lead after 22 minutes as Sevilla put together a classy counter-attack to expose the Barcelona backline.

However, it lasted just four minutes as Messi stepped up and produced a sensational finish, hitting a first-time volley into the back of the net to draw his side level, as seen in the video below.

That’s now 31 goals and 17 assists in 32 games for the Argentine icon, as he simply shows no sign of slowing down and continues to produce when most needed by the Catalan giants.

Nevertheless, it remains to be seen if they can secure a win in a tough encounter to temporarily stretch their lead at the top of the La Liga table to 10 points.

Lionel Andres Messi is the name.

What a goal by Leo Messi! pic.twitter.com/l37qI08p9W

Opinion: What Bartomeu’s potential axe means for Messi and Koeman’s futures at Barcelona