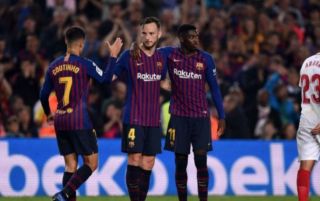 Barcelona midfield stalwart Ivan Rakitic has publicly addressed his future at the Nou Camp amid ongoing talk of an exit this summer.

The 30-year-old has been an influential figure since joining the Catalan giants in 2014, making 251 appearances for the club while winning a whole host of trophies including three La Liga titles and a Champions League winners medal.

As he continues to play a fundamental role for coach Ernesto Valverde this season, doubts have been raised over his future at the club due to ongoing contract renewal issues.

However, the Croatian international has now publicly insisted that he wants to remain with Barcelona and has no intention of moving on this summer despite all the speculation over his future.

“I still have a three-year contract and I want to stay here. It fills me with pride to know that big clubs are interested in me, but I still see myself at Barcelona,” he is quoted as saying by Sportmediaset,who add that Inter have been heavily linked with a €40m swoop.

“Sometimes I laugh in the morning reading all the rumours about me.”

That would suggest that Inter will have to look elsewhere for midfield reinforcements this summer, while Barca won’t be raising money from Rakitic’s sale to fund their own transfer activity.

Competition will be fierce at the Nou Camp next season though, as with Barcelona splashing out €75m to sign Frenkie de Jong from Ajax, as per the Guardian, they’ll be adding more quality and depth to the squad.

It could be argued that the likes of De Jong and Arthur are seen as the future, but as he has proven so far this season, Rakitic still has plenty left in the tank and is eager to continue at Barcelona.